Belle McCormack is the Owner, Director, and Lead Instructor for The Firearms Academy of Seattle, Inc. She started teaching with us in 2016 and came on staff full time in 2017 as our Operations Manager. In 2021 she took over as President of the company and finalized the sale of the company with Marty in 2022. Belle was formerly a Private Security Certified Handgun Instructor for the Washington State Criminal Justice Training Commission and taught in their Instructor Certification Program. She also holds an instructor certification from Tom Givens/Rangemaster, Massad Ayoob Group Deadly Force Instructor, Shot-IQ Pistol Instructor, and is a NRA Certified Pistol Instructor. She has received additional training from Massad Ayoob, John Farnam, Chuck Taylor, Gunsite, Terry Trahan, Rory Miller, Marc Macyoung, Karl Rehn, Ed Monk, Steve Fisher, Jared Reston, Tim Herron, Kerry Davis, Mike Pannone, Bill Blowers, Robert Vogel, Scott Jedlinski, and Joel Turner of Shot IQ.

Belle has over 20 years of experience in training, coaching, and other adult education in a variety of fields. Before coming to FAS, she was the volunteer rangemaster at Jefferson County Sportsmans’ Association from 2014 to 2016 and assisted at Arms Pro, LCC, a gunsmith in Port Townsend, WA.

Marty Hayes is the founder of The Firearms Academy of Seattle, Inc. After spending years as a police officer, competitive shooter and police firearms instructor, he started sharing his knowledge of firearms and self-defense related issues on a professional basis, and in 1990 started the Firearms Academy of Seattle, Inc. For three decades he has been teaching firearms and self-defense to the Seattle/Portland area population, with thousands of satisfied students.

Erik Knise is the Operations Manager, resident tech guy, and a Staff Instructor for FAS. He started training here in 2016 and after completing nearly the entire FAS curriculum in 2017 he was invited into the FAS Apprenticeship Program where he received his instructor certifications in Handgun, Rifle, and Shotgun in 2018. Erik is a Private Security Handgun and Shotgun Instructor for the Washington State Criminal Justice Training Commission, holds an instructor certification from Tom Givens/Rangemaster, MAG Deadly Force Instructor, Patrol Rifle and RDS Instructor from Centrifuge Training, Shot-IQ Pistol Instructor, and is a NRA Certified Pistol Instructor.

Erik is the first person to have passed Chuck Taylor’s Handgun Combat Masters Test with a traditional DA/SA (Beretta 92A1). He is a Master class IDPA shooter and won the Stock Service Pistol division at the 2018 Washington State IDPA Championship hosted here at FAS. He also holds Tim Herron's Barrel Drill Patch #28.

Outside of FAS, Erik works full time in the industry at a firearms manufacturing company.

Tom is a 4th Dan Black Belt in TaeKwon-Do under Master Kim Hong Sik, and taught that martial art for 13 years. He has trained in Judo, Kajukenbo and Hwarang Do, and received training from Marc MacYoung, and Rory Miller.  His formal firearms training includes time with Massad Ayoob (multiple graduate and a Staff Range Coach for Massad Ayoob Group ), Ken Hackathorn, Chuck Taylor, Clint Smith, and Jim Cirillo.  Tom is a graduate of Instructor Development courses from John Farmans’ DTI, Tom Givens Rangemaster organizations, and Gunsite Academy, as well as a multiple graduate of those schools. He is a certified NRA Pistol Instructor, Shot IQ Instructor, and a MAG Judicious Use of Deadly Force Instructor.

A former commissioned Reserve police officer/training officer, Tom spent 38 years practicing pharmacy to pay his ammunition bills.  In his private time he enjoys studying the practical/legal/moral aspects of self-defense, and history. He is proud of having the good sense to marry his favorite shooting partner. 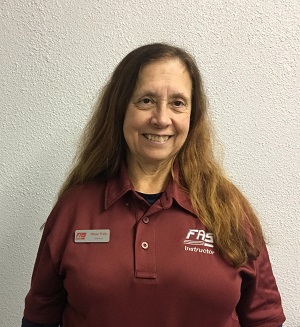 Diane came to Firearms Academy after teaching TaeKwon-Do for 13 years for Grandmaster Hong Sik Kim. She earned a 4th Degree black belt in that art, as well as colored belts in Kajukenbo and cross training with Tony Blauer, Marc McYoung, Rory Miller, Terry Trahan and others.

She took her first class at FAS in March of 2003 and has completed the entire handgun program as well as the handgun retention program and most of the rifle and shotgun programs. She began teaching women’s programs for FAS shortly thereafter and joined the instructional staff officially in 2005. She has extensive training with Massad Ayoob, including a Judicious Use of Deadly Force Instructor credential. She has also studied instructor level courses given by Tom Givens, John Farnam, and, most recently, Gunsite Academy. A multiple Gunsite graduate, she has also studied with Clint Smith, Chuck Taylor, Ken Hackathorn, Jim Cirillo, and others.

Diane is happily retired from freelance writing for gun industry publications with multiple articles published on gun reviews and training articles for Women & Guns Magazine, USCCA Concealed Carry Magazine and Harris Publications. Her focus is now on teaching handgun programs for FAS and continued training to support her passion for this ultimate martial art.

Married to her favorite shooting partner, Tom, for over 40 years, they are often teamed as instructional staff for the FAS programs.

Charles took his first class at FAS in 2015 and since then he has completed the entire FAS curriculums in handgun, rifle, shotgun and special interest classes. Charles was invited into the apprentice program in Jan 2019. A former Army Paratrooper and firearms instructor. He is an avid lifelong learner, having completed such classes Tom Givens Instructor Certification, John Farnam Carbine and Handgun, Massad Ayoob MAG 80, Matt Graham Carbine and Handgun, and Gunsite courses. Other instructors he has learned from include Karl Rehn, Ed Monk, Chuck Taylor, Steve Fisher, Jared Reston, and others.

He was President and Chief Trainer of the Centralia Rifle Club from 2017-2019 and spends much of his time influencing and encouraging the next generation by coaching Junior Air Rifle and the Centralia High School Smallbore Rifle Team. 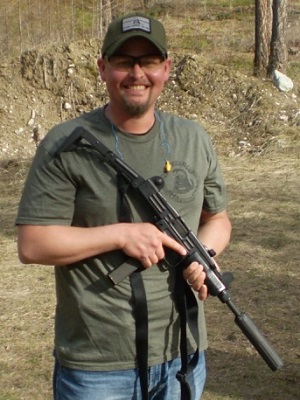 Chris Harold came to his first class at FAS in 2011, and has been a familiar face ever since. He was invited to join the FAS staff in 2020. Chris comes to us with a background in adult education, and for most of his adult life he’s been teaching in one form or another, including several years working with novice shooters at an indoor range.

Chris is a lifelong student of the art, a life member of the N.R.A., and is passionate about the 2nd Amendment. He enjoys helping students reach their potential when it comes to the defensive use of a firearm. 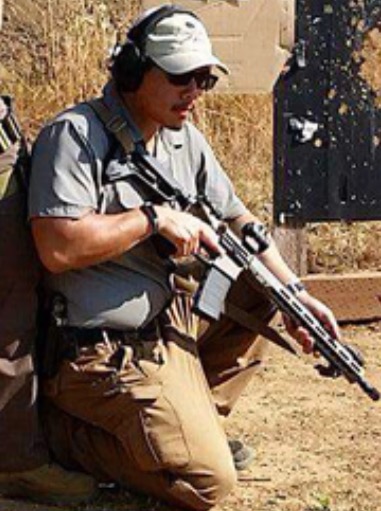 His outside training includes Massad Ayoob, Tom Givens, Marc MacYoung, Rory Miller and others. He is also a Gunsite 499 graduate along with other courses attended throughout the US.

Outside of F.A.S., Brian has worked in the industry as a Regional Sales Manager for the past 7+ years with background knowledge in firearm accessories and firearms. 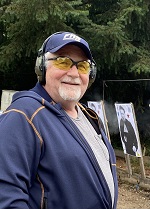 Like many, Dan has been shooting guns most of his life. He has always enjoyed the technical and challenging aspects of working with firearms. He served in the Navy and has hunted upland birds across the country for over 30 years, most recently with his beloved dog Nellie. However, it wasn’t until he started professionally training with firearms later in life that he decided to pursue this interest as more than a hobby. He has thoroughly enjoyed being a student at FAS and is now excited to share his passion for teaching and helping others achieve their goals at the same institution where he has learned so much.

In addition to the outstanding in-house training at FAS since 2018 Dan’s previous experience includes training with the Massad Ayoob Group, the Reston Group, Threat Dynamics, and street survival skills with John Murphy. Dan is also a certified NRA instructor.

When Dan is not at the range, he is running a 32-year established HVAC company on the Oregon coast. 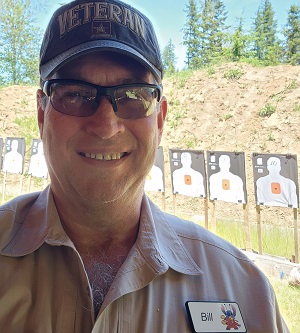 Son of a Soldier in the US Army, Bill grew up around Military bases and started shooting a 1911 with his Dad at around the age of 12.  He became an Officer in the US Army, participated in Operation Desert Shield / Storm, and later served full-time in the National Guard.  Bill retired as a full “bird” Colonel with two Masters degrees, and a desire to continue serving.

Bills shooting experience includes being invited to compete in the 1984 Olympic tryouts for smallbore and air rifle. Since 2018, Bill has been training with FAS, learning from both Staff and Guest instructors such as Massad Ayoob, Tom Givens, Marty Hayes, Zach Campbell, Steve Fisher, Ed Monk, Jared Reston, John Murphy and Joel Turner among others

Bill was accepted as an apprentice in 2021, and joined the staff in 2022.  He enjoys helping other shooters who wish to develop and increase both their shooting abilities, and legal understandings, as responsibly Armed Citizens. Here at FAS, he believes we teach and learn how to do both.

Bills personal motto is:  Do the Right things, in the Right way, for the Right reasons – and Constantly Strive for Improvement. That seems to fit well for shooters here at FAS.

Rick has been a familiar face around Firearms Academy since he started taking classes in 1991. He began teaching for us in 1998. There are few F.A.S. classes Rick has not completed, and many of his credits include programs that have since been incorporated into other classes in Firearms Academy curriculum.

Now retired, he includes hand loading ammunition among his hobbies.

We first met Frank as an F.A.S. student in 1998 and in 2011 brought him on to our staff, where he teaches his Emergency Treatment of Gunshot Wounds and Related Injuries class, as well as assisting in the presentation of other courses.

In his personal life, Frank notes that he is married to "an outstanding wife," with four children

Jeff has been teaching at FAS since 2012. His formative years of firearms training began in the United States Marine Corps serving with 2nd Force Reconnaissance Company. He was selected for and graduated from the USMC Scout Sniper Instructor School Quantico, VA.

After leaving the Marines he served with the USAR 12th Special Forces Group while he attended college to become a physical therapist and athletic trainer.

He is a NRA certified Pistol and Rifle instructor and is FAS certified to teach all of our long gun classes including precision rifle and shotgun. He pursues continuous quality improvement through training with American Small Arms Academy, Defense Training International, and Rangemaster.

He is a lifelong hunter and is a certified hunter education instructor for Washington Department of Fish and Wildlife.

He is a survivor of parenting 2 college age children and has a wife who still kind of likes him after 26 years of marriage.